Structural diversity of glucosinolates and their metabolic products

Glucosinolates are natural defense and signal molecules in plants of the mustard order, including important crops such as mustard, cabbage and oil-seed rape.  They can be transformed into a variety of defensive or signaling molecules. Two examples are shown below: The glucosinolates gluconasturtiin and glucobarbarin, and their respective transformation products phenethyl isothiocyanate and barbarin. You may notice that a tiny difference in the glucosinolate structure can have a major influence on the product produced. (Because of nomenclature-priority rules, the R-S designation of a chiral center change after rearrangement near-by, although in reality the center is unchanged). 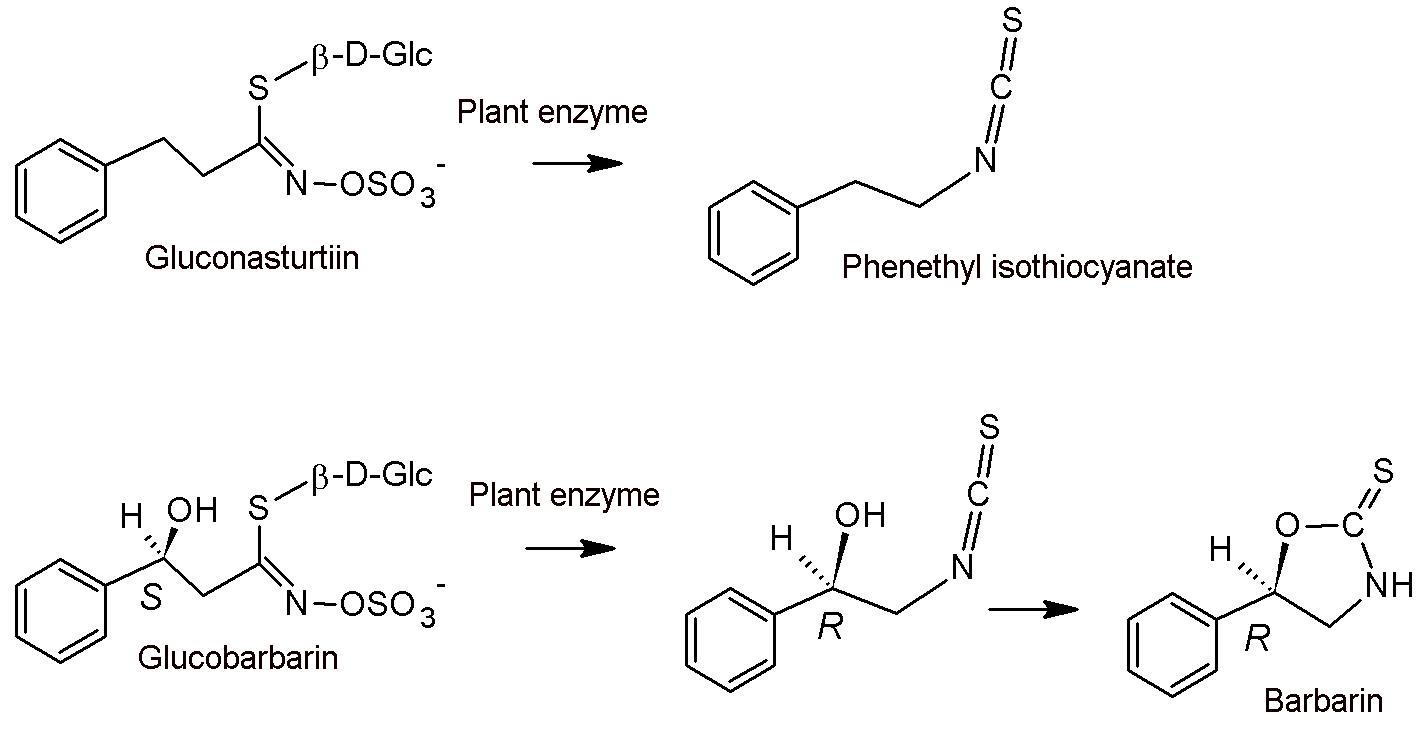 Glucosinolate structural diversity has been explored since 1994 in this project, usually from biochemical and chemical ecology perspectives. We have been focusing not on crops but on the chemical defense diversity of their wild relatives. The overall aim has been to understand the evolution and ecology of defenses, and to identify useful genetic resources in wild plants. A break-through in ecological aspects was the elucidation of the detoxification pathway of sinalbin when wild mustard plants are eaten by cabbage butterfly larvae (Müller et al. 2003, Chemoecology 13, 47; Wittstock et al. 2004, PNAS 101, 4859; Agerbirk et al. 2007, Insect Biochem. Mol. Biol. 37, 1119).

Both insect enzymes and plant enzymes take part in sinalbin detoxification in the insect. The plant nitrile hydratase is active in the insect gut.

Structure elucidation has been based on the state-of-the-art method, nuclear magnetic resonance spectroscopy (NMR). But since 2012, we have also worked on perfecting modern chemical analysis methods with mass spectrometry detection, in order to be able to identify glucosinolates reliably and fast. Below (A-F) you see a data example with structural interpretation (Olsen et al. 2016, Phytochemistry 132, 33). 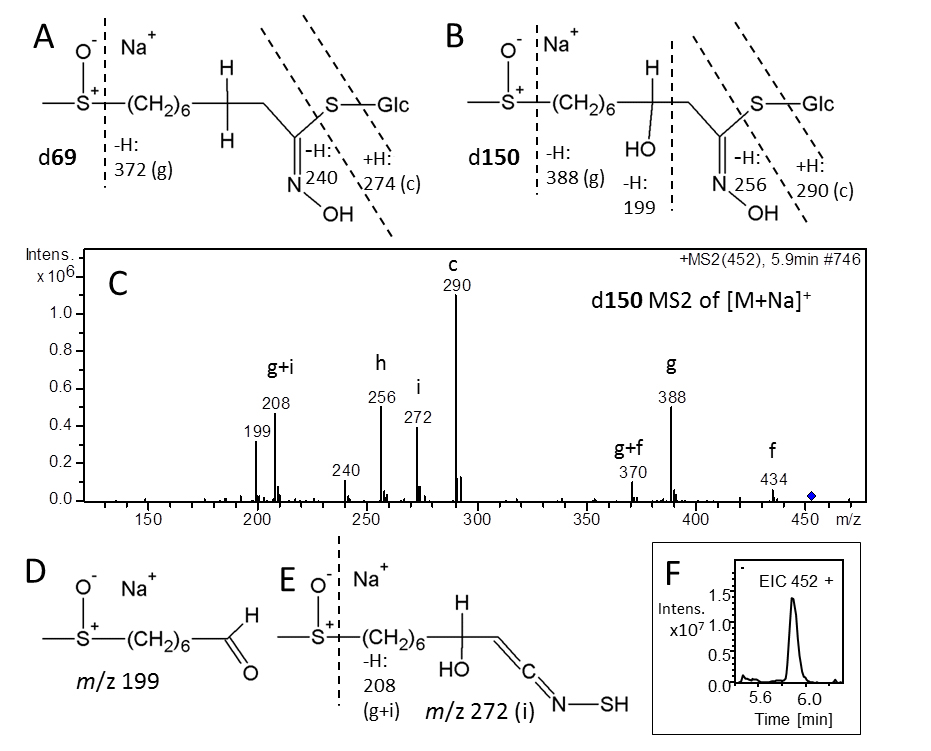 During the years, we have discovered many new structures and related enzymes. One focus has been to understand the biochemical effects of minute structural differences, such as between isomers. From an intellectual point of view, my personal favorite is the effects of either para- or meta-hydroxylation of glucobarbarins. No hydroxylation or meta-hydroxylation give biochemical hydrolysis to oxazolidine-2-thiones (notice double bonded S), while para-hydroxylation give hydrolysis to an isomeric new kind of glucosinolate hydrolysis product, a thiazolidine-2-one (Agerbirk and Olsen, 2015, Phytochemistry 115, 143). This molecule was named kjaerin in honor of one of the founding fathers of glucosinolate chemistry, Professor Anders Kjaer (1919-2012).

The position of the left-most oxygen in each of these glucosinolates changes the positions of sulfur and another oxygen in the products. 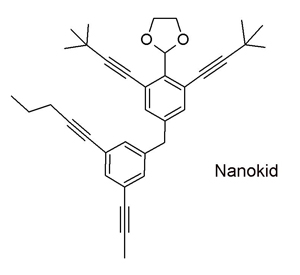 We are passionate about discovering new molecules. One molecule that has not yet been detected from nature is ‘nanokid’.

But the structure illustrates well our feelings about structure elucidation.

The structures below have been reported from wild plants over the years. You may notice that we also investigate other metabolites than glucosinolates. This is done to keep a holistic understanding of the experimental plants. And for the researchers to keep mentally fit! Coffee in huge amounts is also needed for structure elucidation. 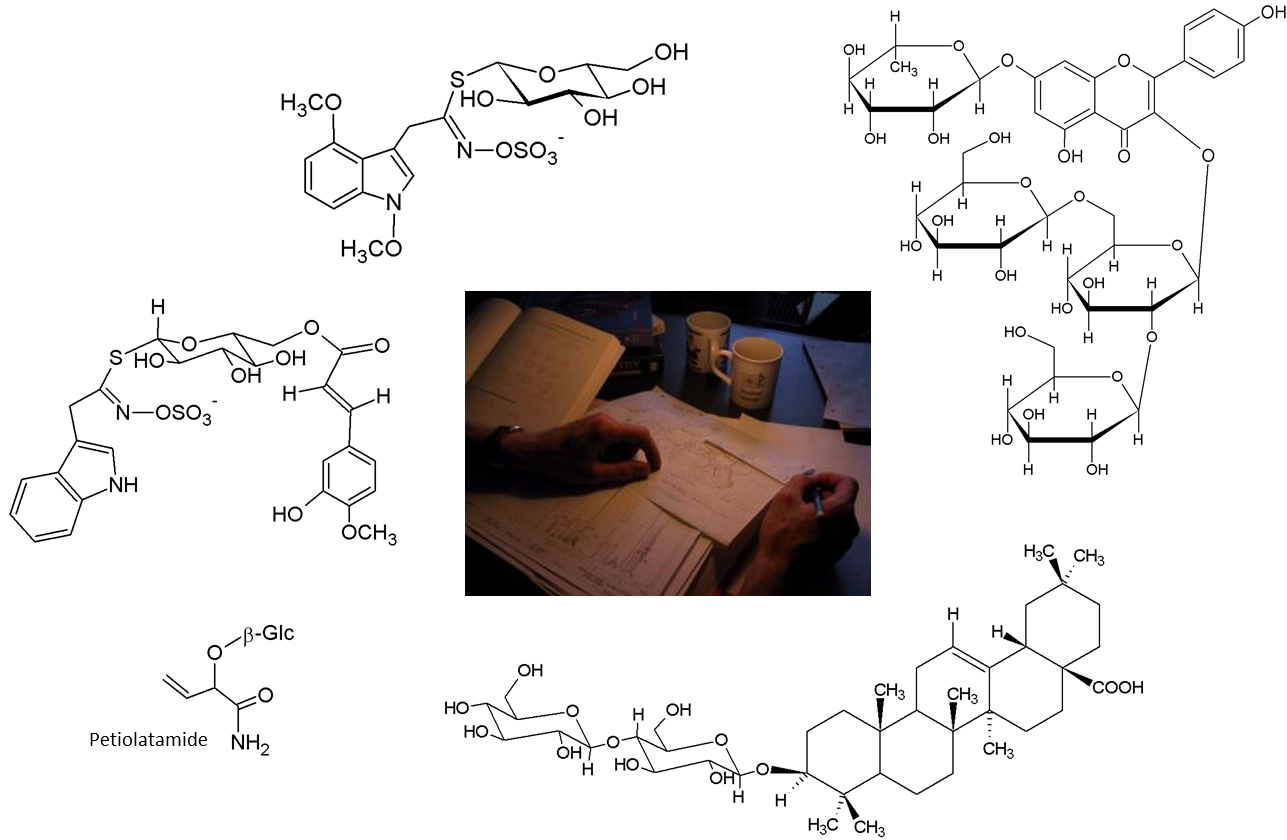 The main experimental plant for this research is Barbarea vulgaris (wintercress). A variety of insects are also studied.  We have an insect susceptible type and a resistant type of the plant. Below, you see happy larvae on a susceptible plant and a dead “newborn” larva on a resistant plant. The significance of glucosinolates and other molecules (notably saponins) for the resistance biology of Barbarea vulgaris is the subject of on-going research. 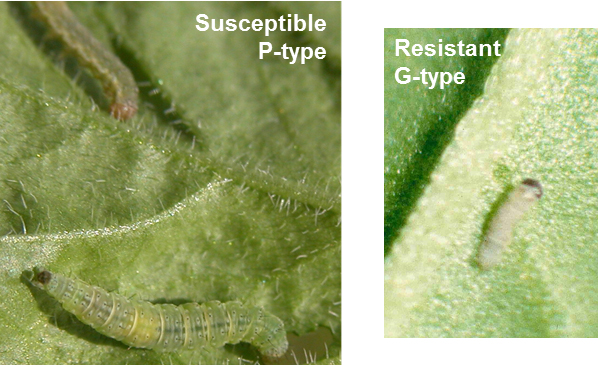 Within one plant species, one type is good insect food, another is deadly!

In recent years, transcriptome and genome resources have been established for this upcoming chemical ecology model plant, which will no doubt allow many new results in the years to come.

Inspecting experimental cabbage plots with scientists from the Institute of Flowers and Vegetables, Chinese Academy of Agricultural Sciences (CAAS), authors of the first published B. vulgaris transcriptome (Liu et al., 2016): 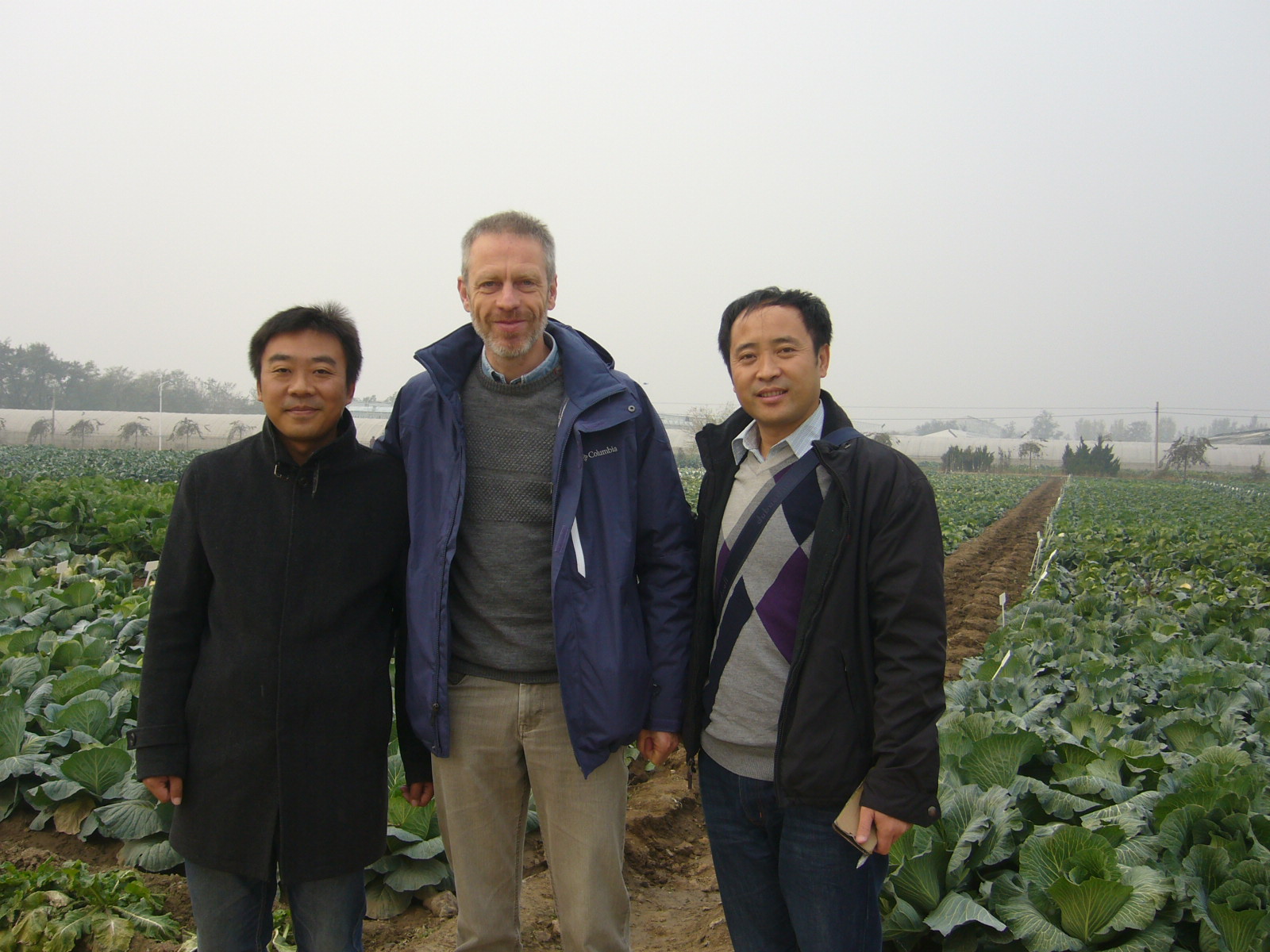 14-09-2018
We have published a comprehensive analysis of glucosinolate products in our study plant, Barbarea vulgaris, as well as negative effects of glucosinolates on a herbivore. Read the publication here.

01-07-2017
Niels Agerbirk joins the Editorial Board of Phytochemistry, an official journal of the Phytochemical Societies of Europe and North America.

01-03-2017
Agerbirk and Olsen glucosinolate review is third most cited paper of the journal  Phytochemistry since 2012.